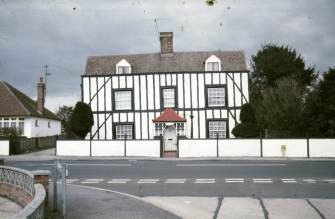 This photo is taken from Ramplings Avenue(position of the Ware Pond) towards Yew Trees in St.John’s Road. (In between Elm Grove and St. John’s Roundabout)

Where Ramplings Avenue is nowadays in Gt. Clacton, used to be the Ware Pond, and it was here it said there was a ducking stool used on ladies of the Parish who were thought to be witches!

As you might know, a famous judge called Matthew Hopkins lived at Manningtree and in 1644 alone, he put on trial and had executed 60 Essex witches. Any woman who lived alone, had a black cat and was a keen gardener might be suspected of being a witch!

On 29th July 1645, several women were charged with ‘having communion with the devil and for nourishing and entertaining imps and working mischief on cattle and neighbours.’ Rebecca Jones of Gt. Clacton was said to have murdered several people because of her spells. When she was a servant at John Bishop’s house she met a young man who pricked her left wrist with a pin and ran off with some of her blood. Three months later on her way to St. Osyth with a basket of butter, she met a ragged man who gave her ‘3 black tail-less four-footed things like moles.’ She called them Margaret, Annie and Susan!

In court it was said, Rebecca sent one imp to kill a sow and another to kill Benjamin Howes’ young son, who was taken ill and died. Rebecca had been heard to say Benjamin would suffer for upsetting her.

With witnesses like the Rev. Joseph Long of St. John’s Church (who in a different court case had been described as a ‘common ale-house haunter’), she was found guilty and hanged. Usually the vicar and a few other important villagers had to sign a statement about the ‘witch’ before she was arrested and tried.

Here are some other Gt.Clacton witches…“Cecilia Celles on 4th June,22nd year of Elizabeth’s reign (1580), bewitched John Death,son of Thomas,who languished until 4 p.m. when he died.” Hanged.

“Elizabeth Packman of Gt,Clacton, spinster on 10th Feb 1593 bewitched Luke Crosse, who suffered until 10 July when he died.”