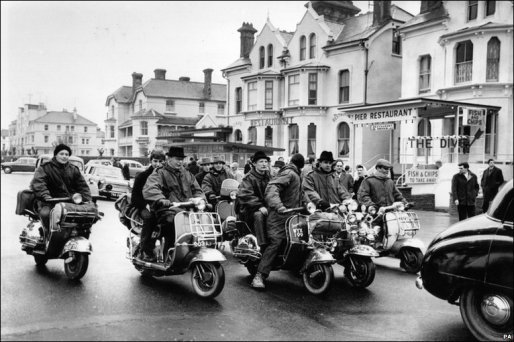 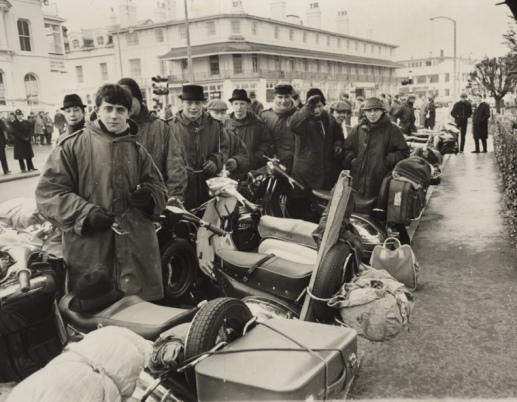 The Mods & Rockers “riots” in Clacton over the Easter weekend 1964 made the national news headlines. The mass influx of Mods and Rockers had initially been helped ironically by Clacton Council as they had gone out of their way to promote the town as a lively resort in an attempt to specifically attract youngsters by laying on. some top groups of the time to appear in town. These included Freddie and the Dreamers at the Blue Lagoon on the Pier, Shane Fenton and the Fentones at the Council's own Princes Theatre and Johnny Pilgrim and the Classics at the Westcliff Hotel. They had even laid on specially designated camps to accommodate the large numbers they were hoping would arrive on the outskirts of town, at Holland, Jaywick and by Clacton airstrip.

According to the way it was reported in the national newspapers, the weekend's disturbances started quietly enough on Good Friday as a trickle of teenagers on motor scooters, the Mods, began to arrive to have a good time with all the amusements and concerts being laid on and made their way to the specially designated camps.

Later on during the day, an even smaller number of teenagers on motorcycles, the Rockers, began to turn up. Word got around both communities in London and the surrounding area that Clacton was the place to be for both the Mods and the Rockers because not only were several of their own group there but that the enemy was also there. This was enough to make Clacton the place to be that Easter. The trickle of teenagers arriving on Friday turned into a torrent on Saturday as hundreds more arrived to join the fun and bolster their own side in case of any trouble.

On Saturday evening Freddie and the Dreamers played to a packed Blue Lagoon containing an audience of 1,200 youngsters. And it was not long after this that the first clash between the two groups came in Pier Avenue as the two groups faced each other and boots, bottles and blackjacks (or batons) were swung around and thrown.

The police, who were on stand-by given the numbers of teenagers who had been arriving, were very quick to respond and got in between the two groups. Unfortunately if there was one thing the Mods and Rockers hated more than each other it was the police. From then on, the gang warfare was largely forgotten and if not exactly uniting the two teen cultures did give them a common cause and their fire was turned on the police.

The fighting went on all through the night with a brief respite just before dawn, but soon after breakfast time on Sunday, violence flared up again with the windows of the Pavilion being broken. Extra police were brought in from neighbouring towns.

Just after lunch something like a thousand youngsters congregated around the Marine Parade/Pier Avenue junction. But the greatly increased number of police gradually began to take control of the situation and dozens of arrests were made and the gangs began to break up.

By Monday, although there were sporadic outbreaks of violence things had calmed down greatly. During the afternoon, the Chief Constable of Essex, Mr J C Nightingale, arrived in Clacton to see what had happened. His response was to say, "I am convinced we have won this battle against those who have no respect for law and order."

There is no doubt that the newspaper stories and headlines helped that weekend go down in history as the time Clacton was completely wrecked by mobs of Mods and Rockers, when innocent bystanders were in fear of their lives and as the weekend that sounded the death knell for Clacton's tourist industry. But was it really as bad as it was made to sound by the press, the Daily Herald excepted, or did a media hungry for news on a slow news weekend make it out to be worse than it really was? Certainly the police and the Council thought they had.

The following week an enquiry was held by the Council into the riots. Councillor Moody summed up the Council's views by saying, that the national press reports of the situation were "grossly exaggerated". Clacton Council's Surveyor's Department reported the total damage at £213, not a vast amount, even in 1964, equivalent to about £3,600 in today's money. Out of the thousand youths estimated to be here only sixty were arrested and, of those, only 12 were actually prosecuted, and fined a total of £243.

Chief Superintendent Wood emphasised to the enquiry that "at no time did the situation get out of control."

So, were things as bad as painted in the national press? Without exception, Clacton residents who were here at the time have said they felt the press reports were greatly exaggerated. Some reported actually witnessing incidents staged by the press themselves to make it look worse than it was, with, for example, reporters handing teenagers clubs or even knives and then taking photos of them. The late Leslie Price, who was the owner of the Waverley Hall Hotel at the time said, " I didn't see any violence personally. There were stories in the press about a break in at the Waverley Hotel. This was completely untrue. There were a number trying to get in to use the toilet and we let them in two or three at a time. The others queued patiently. There was no trouble at all, but that was not how it was reported in the papers.”

Robert Gillespie, a solicitor in the town, said he had been at an event at Butlin's and came back into the centre of town along Marine Parade and although there were a lot of teenagers and motor bikes around he didn't see any sign of trouble. Prominent Council official, Bert Foster said that he came into town a couple of times over the weekend and also said there were a lot of bikes and teenagers but saw nothing untoward. He said that as far as he could see, most youngsters were perfectly polite and were well-behaved.

Of course, there is no doubt there was some anti-social behaviour and fighting, but, as it happened, this was mainly in the middle of the night when not many other people were around and very little during the day. Also, there is no getting away from the fact that there was some damage done, some windows were broken and there were some arrests. So it wasn't pretty. But, on the other hand, some of the local youngsters, neither Mods nor Rockers, thought it was all quite exciting and actually went along for the express purpose of having a look at what was going on but didn't really see anything too bad. The impression gained from people who were actually in Clacton over that weekend is that, unpleasant as it undoubtedly was, the newspapers made it all sound far far worse than it actually was and Clacton was at no point on the verge of collapse.

However, as a result of the bad publicity, whether justified or not, what worried local business people, especially the guest house and hotel owners, was that people would be put off visiting Clacton in case there was a repeat performance. Although still a popular seaside resort in 1964, there is no doubt that the decline from Clacton's heyday was already in evidence as more and more families were starting to go abroad for their holidays to somewhere where they could rely on the sunshine and a number of theatres, cinemas and hotels had already closed in Clacton, for example, the Kinema which had closed in 1962.

The only two apparent casualties of 1964 were the Savoy Theatre, though this seems to have closed at the end of 1963 after having been open for just two weeks that year for two CADS productions, so its closure was not related to the events of that Easter weekend in any way, and the Ramblas Open Air Concert Party on the Pier which closed after the end of the 1964 season, this was living on borrowed time anyway and was the last open air concert party of its type to operate anywhere in Britain, so its demise was not wholly unexpected. Other than that, the West Cliff, Ocean and Princes theatres all continued, the Band Pavilion retained its popularity and continued into the 70s, the Essoldo and the Odeon carried on as did Butlin's, the Punch and Judy, the Pier and most everything else. Bert Foster said that, as a Council officer, he saw no signs that holiday bookings dropped any more dramatically that summer or in 1965 other than as part of the gradual decline that Clacton was experiencing at that time.

There is no doubt that the Mods and Rockers riots of Easter 1964 will always be seen as one of Clacton's major historical events. Indeed, one of the major events of 1960s Britain. However, whether it was quite how it was reported and whether it had the lasting effect often ascribed to it is another matter entirely.

Returning to the Tivoli/Savoy, I have managed to piece together some more of its history, although I have not yet managed to glean all of the facts and relevant dates. Particularly sought are as to when it finally closed as a theatre and any details as to its last show. I got as far as 1963 with the local East Essex Gazette and it was still in use as the Savoy Theatre during that year, although it appears with only limited use as the only shows advertised during that year were a short run of the Clacton Amateur Dramatic Society's production of "Rebecca" from March 12th-16th 1963, followed by another CADS production of "The Amorous Prawn"  from 1st-8th June. From 18th June 1963, "for a season" the Savoy advertised the Derek Pollitt's presentation of the musical "Salad days." It is not yet clear whether the theatre had any further use during 1964 (and unfortunately the newspaper library at Colindale where most of my research was carried out is now closed - the local newspapers will not now be available again at the main British Library at St. Pancras until August 2014), but I managed to track down the date that it reopened as a bingo hall. This was originally the Savoy Bingo Club and had its 'Grand Opening' on 4th June 1965. So, its last stage show(s)/closure as a live theatre which I've still yet to trace would have been between the second half of 1963 and June 1965.

The Kinema was closed in early-1962, and was demolished in April 1962. A Fine Fare Supermarket was built on the site. This later became a Fads store, and by 2008 was a Peacock’s store. 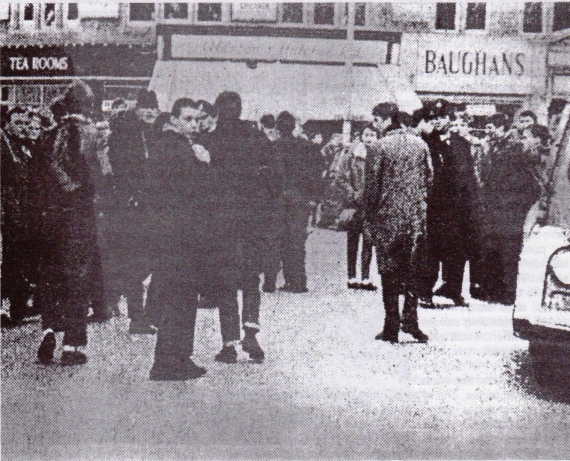 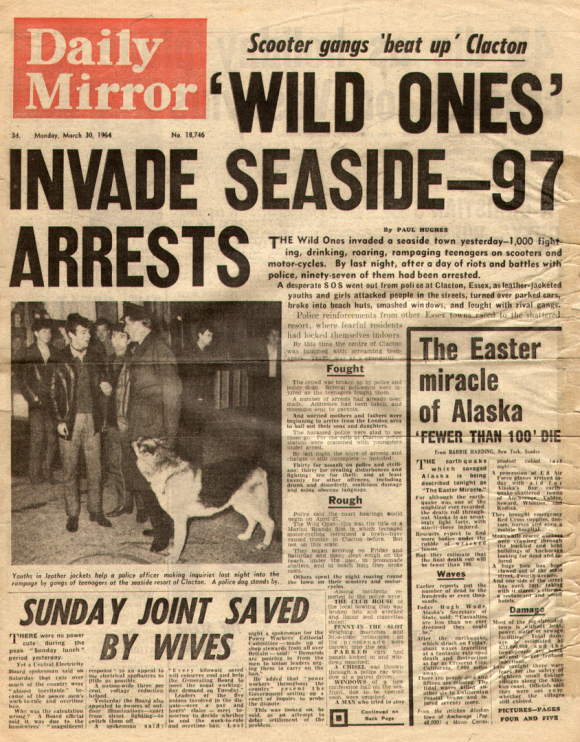