A 1934 article called 'Talk of the Seaside' included an interview with Ernest Kingsman about how he made Clacton Pier such a wonderful place after buying it in the 1920s.

Ernest Kingsman started first in the hotel business, which led him to buy some land near Lowestoft. He wanted to build a racecourse but the local clergy objected. Then just after WW1, he bought up some army huts with the idea of starting the first holiday camp .

He needed cheap fares to make it pay. The train fare from London was 33s 6d return and by coach 28s 6d. So to bring in the people he bought the Belle LIne of coast-steamers and the 5 piers they used!

Kingsman said he never went on piers and anyway Clacton Pier was then 30ft wide and "as flat as a dead bass" He used to hear families say 'What shall we do now?' as they left it!

In the first season Mr Kingsman rigged up a tarpaulin roof over poles, under which visitors could dance to a band. It was a wet summer and the tarpaulin sagged, the band played with their collars up and the dancers held umbrellas up while they danced! However, Mr Kingsman remarked that by 1934,1200 people danced in the Blue Lagoon dance hall every night.

Mr.Kingsman said that "now in 1934, 4 steamers can berth at the same time on the new berthing arm. I have spent £400 on a new machine to pump nitrate of silver into the swimming pool for extra purity. We have 3 theatres, a zoo and an open-air swimming bath."

He added "at the beginning of my 2nd season a young man wandered into my office and asked if he could give daily shows for the children. I sent him along to my foreman with instructions for a small open-air dais to be set up with some carpet in front for the kiddies to sit on."

The next afternoon I heard a hullabaloo and rushed out of my office. At the end of the pier, a thousand people were standing and scores of children were sitting and shrieking with laughter.

The young man, aided by a couple of children from the audience played a burlesque drama.The children wore moustaches and comic hats and made up their lines as they went along! It was a riot and that was the beginning of Bertram and he's been here ever since.

Incidentally, Bertram is the most-kissed man in Clacton. he has made 'Kiss Your Uncle' a popular catch-phrase.' The reporter watched Bertram and his 'three brilliant 14-year-old assistants-Hetty Braine, soubrette; Audrey Foster, 'hot tap dancer' and Dorice Smith, the only child ventriloquist in Britain.'

During most of the year he lived with his family on the pier itself.

His flat was built of glass bricks and stretched right above the turnstiles and nearly across the whole breadth of the pier. His 5 rooms faced inland and he could watch the visitors arriving!

At one end his gallery overlooked the ballroom where in the mornings, the show-girls practised their routines and later couples would dance the night away whilst at the other end Kingsman overlooked his circus where up to 5 lions would perform.

There wasn't much room for Mr Kingsman's favourite Dutch oil paintings of farmyard poultry but he had 2 on the wall in his office.

When the season was over he spent time with his Parliamentary agent, because an Act of Parliament was needed for every pier extension.

Piers were controlled by the Ministry of Transport, who had to agree to make a provisional order before a Bill was represented.

The Marine Department of the Board of Trade wanted to know if navigation was affected by the pier.

The Admiralty would want to mark the pier on their charts and Trinity House had to agree how the pier was lit.

On top of that Mr.Kingsman had to buy up some of the bed of the ocean as the Crown owns the seabed below medium tide mark and the 3-mile limit. Not all of the sea-bed under the pier was sold,but only those parts of it which the piles of the pier were to rest. So the waters underneath the pier still remain technically part of the High Seas.

Kingsman had to pay £1500 for a site for the supports of his swimming pool. He had to apply for 9 Acts of Parliament and each left him 'with an extra battle-scar.

'A Lords' committee once asked him about his 'collection of huts'.

Ernest Kingsman toured the continent regularly and once he visited a cinema in Monte Carlo where he liked the chairs so much he ordered 1200 for his theatre on Clacton Pier!

The photos below are of the Pier (before 1937), a cartoon of Ernest Kingsman and Bertram, Clown Bertram and the last photo is Mr Kingsman and the gang after building Steel Stella. 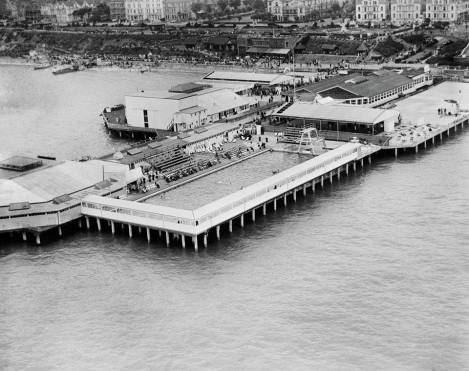 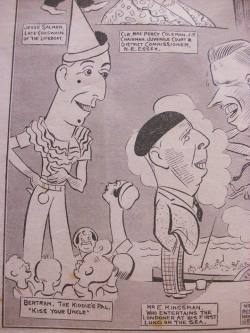 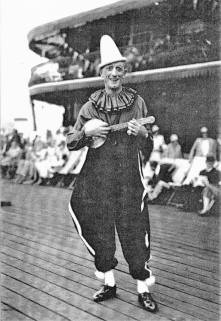 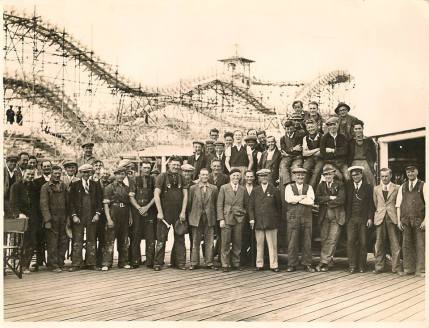