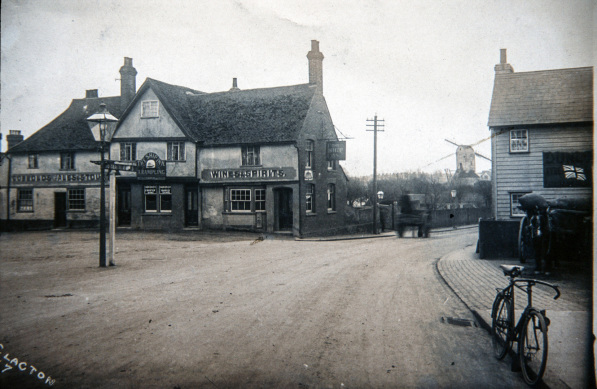 200 years ago Gt.Clacton was a small village centred around the church. Most of the inhabitants were tradesmen or poorly-paid labourers on the outlying farms. It wasn’t until 1871 that Peter Bruff developed the land at Gt.Clacton Cliffs and so the desolate beach and the dangerous sandbanks were ideal for smugglers. In the darkness, a light flashing from the tower of St John’s Church would be the signal for the boats to be rowed onto the beach and the brandy, silk and tea unloaded and quickly brought along the muddy track to hiding places in the village.

There are stories of secret tunnels in Gt Clacton and although some say they were mediaeval drains, they would have been excellent places to hide the contraband until it was safe for the smugglers to move it on to Colchester and London. Many local farmers were no doubt rewarded for lending their horses with a ‘drop’ of brandy or tobacco. Villagers wouldn’t peep out of their cottage windows at night if they heard voices . They knew who was passing!

Apart from St John’s Church, the oldest building in the village is ‘The Ship Inn’. Originally a house owned by Lord Darcy, it was bought by Thomas Joy in 1709 for £45 and it became an inn. In the cellar of the ‘Ship’, hidden by barrels of lager, is a bricked-up entrance to a tunnel and several villagers tell tales of how 50 years ago they bravely ventured down it for five or so yards before finding it blocked. Other tunnels were said to connect the ‘Queen’s Head’ to ‘Three Chimney’s’ opposite and from Gt.Clacton Hall to the church.

‘Brook Villa’ is a splendid house in Gt.Clacton with a brick front and weather-boarded at the back. Until recently it had a monkey puzzle tree in its front garden. In December 1832, Revenue Officers knocked at the door and wanted to search the building. Dawson, who lived there, quickly hauled the smuggled goods up the ladder to the bedroom above. He hid the barrels under the bed and told his wife to wet her face and start groaning. Having searched the downstairs and out buildings ,the Revenue Officers were about to go up the ladder. Dawson’s wife wailed and shouted out. One of the men peered into the bedroom and saw her feverish face. “I think she’s dying!” shouted Dawson and the Revenue Officers agreed and rode off. No doubt the couple then had a celebratory drink!

In 1728 a large reward was offered to catch a gang of 30 smugglers who had violently attacked several Revenue Officers on Gt.Clacton Beach .In another incident Customs Officials trying to stop a large group of smugglers from carrying boxes of tea up the beach, were tied up themselves. There were so many places on the Essex coast for smugglers to land their goods and not enough soldiers and Revenue Officers.

Over 200 years ago lived John Bantoft, who was known as the ‘Gt.Clacton giant’. He was 7 feet 4 inches tall and in his cottage he used to have to sleep with his feet sticking out of the window! In the 1780’s he would boast of his smuggling exploits to anyone who would listen in the ‘Ship Inn’. Bantoft was also very strong and if he sat down, he apparently would often break the chair and if he stood up, he’d damage the beams and low ceilings! So he would often just crawl around on his hands and knees !  Bantoft had his cottage searched so many times, but no smuggled goods were ever found.  Most villagers knew where he hid the silks and tobacco-it was under the gravestones in St.John’s Churchyard. He was the only person strong enough to move the gravestones around. Bantoft died in 1807 and there’s still a footstone at his grave .The stonemason put just the initials ‘J.B’ but got the year of his death wrong-putting 1806, before chiselling 1807 over the top!

Bantoft wouldn’t have liked that! 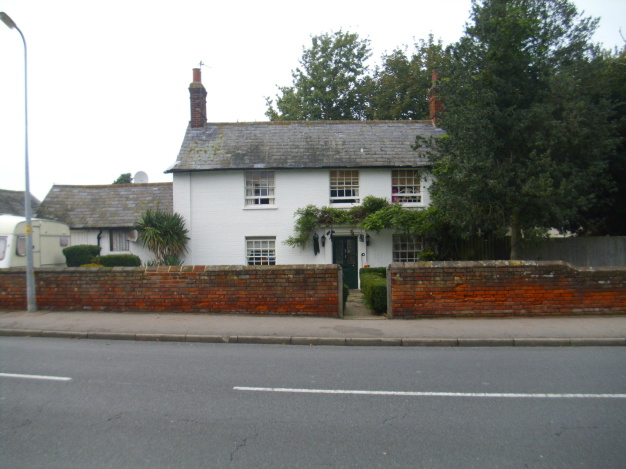