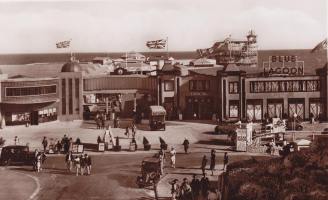 “I like sunny Clacton!” shouted film star Joan Collins as she danced happily with her fiancée, Maxwell Reed at the Blue Lagoon on Clacton Pier in the summer of 1952. She wasn’t the only one!

Record numbers of visitors had come to Clacton. Most had come by train but locals were surprised to see so many private cars, because the price of petrol had just increased again to 1s 6d a gallon. Motorists were baffled by the new Zebra Crossings in the town. “Abolish them, substitute policemen instead and make a 10 mph speed limit. Those orange lights on poles look like goldfish bowls,” wrote one pedestrian who had stood patiently for 5 minutes at a new crossing in Pier Avenue before a car stopped to let her cross.

Seventy-four Blackpool hoteliers spent a holiday in Clacton in the summer of 1952 and they ranked Clacton and Yarmouth as their main rivals. “I think Clacton is a real smasher!” said their spokesman, although the weather was windy and only 64 degrees!

Butlin’s was really busy and there were so many shows to see in Clacton 60 years ago. At the Century Cinema Dick Whittington and his Cat was performed on ice on a special rink installed on the stage. Many thought that the Ocean Revue on the Pier was as good as a West end show. Produced by Frank Adey, local comedian Wally Dunn was the star.

The British darts champion, Dixie Newbury challenged all-comers in Clacton. He played with 6 inch nails! After the matches, he gave an exhibition using Mrs Newbury as a target! He obviously didn’t like his wife much!

The Mayor of Southend was worried when he said “Clacton is getting more and more popular. It is taking the tripper trade away from us. What are we going to do about it?” The sunshine helped Clacton carnival break all post-war records for money raised. The splendid sum of £2,000 was collected in the town to aid the victims of the Devon Flood Disaster. The chairman of the council said “It might have been us.” Unfortunately in 1953,the Jaywick floods proved this was so true!

In the summer of 1952, the heat caused problems on the railway for travellers. Lines buckled in the heat at Thorpe and on another occasion, sheep wandered on to the track near Weeley causing a hold up.The guard told disgruntled passengers “the train has been delayed because the sheep are standing on the railway line looking for water to drink.”

At least it wasn’t the wrong sort of leaves this time!

A satirical letter in a London newspaper said a train travelling from Romford to Clacton covered the journey in 3 hours and fifteen minutes. “That’s 57 miles in almost 200 minutes. And to think our athletes are straining all their muscles to run a four minute mile!”

In 1952,Mrs Parsons, Principal of St Osyth’s Teacher Training College on the seafront at Clacton, felt the temperature was rising when she banned men from visiting the girls in their rooms. “There have been complaints about men from the town,” said Miss Parsons. A flustered student told the press “the men are only helping with our essays.” Despite rumours of a demonstration, Miss Parsons pointed out: “ I run this college. If these men are that good at essays, they ought to go to college themselves but not my one!”

With the lovely weather continuing into August, hundreds of holidaymakers bet on ‘Happy Clacton’, which was running at Newmarket. Did ‘Happy Clacton’ win? No, not quite. It was 29th out of 29 runners! But never mind, in 1952 Sunny Clacton was a winner as far as the thousands of tourists were concerned.