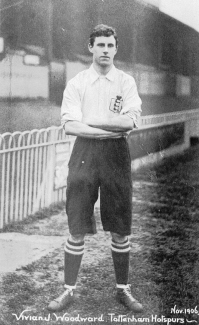 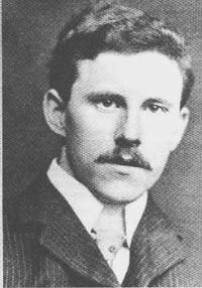 Born in South London on 3 June 1879, Vivian Woodward moved to a house in Pier Avenue, Clacton, with his family at the age of 6, although he had already spent a large part of his life here since the age of 1, as his family rented a house in Ellis Road for the whole of the summer season every year.

As a boy he attended Ascham College, a private school in the High Street. He quickly made his mark at sports and by the age of 12 was already in the school’s first cricket XI. But his main love was really football and two of the teachers at the school were so convinced of Vivian’s footballing prowess that, even before the age of 14, they told his father that “your boy will play for England one day.”

Vivian’s success at Ascham College was noted by Clacton Town F.C. and at the age of just 16 he made his debut for their first XI. His progress continued rapidly and he was soon chosen to play for the Essex County side and was spotted by Tottenham Hotspur, then in the Southern League, for whom he made his debut in 1901.

At the beginning of 1903 he was chosen to play in his first full international match for England against Ireland and marked his debut by scoring two goals. From then on he became a regular choice for England until 1911, captaining the side 12 times.

Tottenham Hotspur were promoted to the Second Division of the Football League for the 1908/09 season. Woodward marked this by scoring Spurs’ first-ever goal in the Football League against Wolverhampton Wanderers. He later moved on to Chelsea and played with them until the outbreak of the First World War when he volunteered for the army.

After the War, he returned to play once more for his old club, Clacton Town, but retired for good at the end of the 1919/20 season.

The above is a brief outline of Vivian Woodward’s career but it does not fully convey the lasting impact he had on the game of football in this country and world wide. Altogether he played in 23 full internationals, scoring 29 goals. Still to this day the record for the number of goals scored per game. To put this into context, Wayne Rooney scored his 29th goal in his 74th International. Woodward played in a further 44 amateur Internationals as he remained an amateur all his life.

As an amateur, he captained the Great Britain gold medal winning football teams of 1908 in London and 1912 in Stockholm, the last time Great Britain won any sort of footballing medal at the Olympic Games.

He led England’s first tours to Austria, Hungary, Bohemia (now the Czech Republic) and South Africa. He was particularly idolised in Hungary after he ran out on to the pitch for their first International match wearing a Hungarian scarf. His influence on the game there, led Hungary to became the first continental team to beat England both in their own country and in England.

We should be very proud of the fact that Vivian Woodward began his career with Clacton Town F.C. There is no doubt that he ranks among the very best footballers ever produced by this country and, indeed, the World.