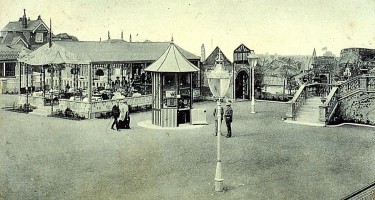 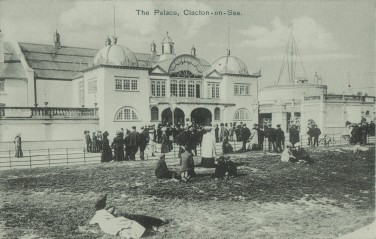 It all started in 1905, when the poet, playwright and journalist, George R Sims, began lobbying in the London press for a seaside resort on either the south or east coast to build a “palace of amusement”. It was his view that too many people were going abroad for their holidays and that England should provide an attraction that would make them stay in this country.

Clacton-on-Sea was, at that time, a comparatively new seaside resort, having been founded just 30 years previously. Towards the end of 1905, local butcher and businessman, Henry Ford, became convinced that Sims was right and he determined to build the ultimate amusement palace in Clacton. He spent about £40,000 converting a four acre site adjacent to the Martello Tower on Clacton’s west cliff, which he had bought from the War Office, into a “miniature Earl’s Court”. The real Earl’s Court in London had been holding large exhibitions since the early 1890s and Ford decided to model his new creation on these.

The Palace-by-the-Sea was opened on 2 June 1906 by none other than George Sims himself. Previewing the grand opening ceremony, the Clacton Graphic said, “The Palace is indeed a galaxy of splendour and will doubtless fill a want in Clacton; induce people from afar to visit the town, and it is to be hoped that not only will the optimistic promoter’s venture prove a financial success, but that his prophecy about the Palace being the means of doubling the population of Clacton in three years be more than fulfilled.” High hopes indeed!

The centrepiece of the Palace was a 1500-seat theatre made of steel and ironwork with cast iron columns, ornamental domes – which could be seen from the paddle steamers arriving at the Pier as well as from the trains arriving at the railway station – proscenium girders and a glazed roof. Flanking the entrance hall with its lines of torches, illuminations and decorations were two terraces called the Madeira Promenade, festooned with electric lighting.

In the grounds of the Palace was a bandstand standing in a lagoon, a pair of fountains which had been imported from the St Louis Exposition in America, whose jets of water were lit by all the colours of the rainbow, several rockeries, waterfalls and gardens as well as several side shows including a shooting gallery, a helter-skelter, a maze, distorting mirrors and several tableaux shows depicting such scenes as the Siege of Port Arthur and The Wonders of the Deep complete with mermaid.

There were also numerous kiosks selling tobacco, cigarettes and chocolate as well as restaurants selling luncheons, teas, dinners, suppers and snacks “at popular prices.” One example of a popular priced dinner was “grilled rump steak, potatoes and bread and butter, one shilling (5p).”

But what made the Palace different from other seaside attractions of the time and encouraged George Sims to think that here was the answer to his plea was its Earl’s Court influence as the grounds contained attractions from all round the world. These included, amongst others, an Ice House with grottos and stalagmites, the Blue Caves of Capri, a Japanese Pagoda, Indian and Swiss style tea houses and a Neapolitan Pergola clad in vines lit by electric light with continuous mandolins playing.

At the opening ceremony, Sims was full of praise for Ford and his creation. This was exactly the sort of attraction he’d had in mind and it now set Clacton in the forefront of seaside resorts in Great Britain. The Clacton Graphic announced proudly, “There are so many attractions that it stands unique in the four kingdoms.”

The Palace-by-the-Sea propelled Clacton to the top of the tree as a holiday destination. It now had an attraction second to none and an exhibition ground second only to Earl’s Court in London. All that remained was to see if the Palace proved to be the saviour of the seaside holiday in this country and if Clacton’s population would double within three years.

There is no doubt the Palace pulled in many thousands of visitors over the next three years and was a big success. However, what Mr Ford, George Sims and the Clacton Graphic all failed to take in to account was the high upkeep of such an entertainment combined with the fact that the holiday season only lasted from June to mid-September, leaving eight and a half months of the year when there was very little income. By the end of 1908, Henry Ford had gone bankrupt.

Just before the 1909 season started however, a saviour, in the form of Hammersmith Borough Councillor, H.R.D. Hooper, stepped in and bought the Palace. He redecorated and renovated the site and even introduced new attractions such as an Oriental Dancing Hall and a continuous slide show showing “novel and interesting” slides from around the world. The new pleasure ground was formally opened on 28 June 1909 by the MP for Hammersmith, Sir William Bull. Curiously, given what had happened to Henry Ford, Hooper reduced the admission charge to 1d (½p).

`Once again the Palace attracted many thousands of visitors during the season, but 1909 was to be its last. At the end of the season the pleasure grounds were closed. By the time June 1910 came around all that was left open to the public was the theatre and a new indoor skating rink. To start with the theatre was given over to showing moving pictures, “powerfully and pictorially portrayed by Ruffell’s Imperial Bioscope.”  In July the theatre went back to putting on variety shows. The skating rink proved very popular and a new outdoor one was also built.

By 1912 the skating rink had also disappeared and just the theatre remained. After the First World War, the theatre was used by visiting repertory companies and, in one play in 1924, called The Barber and the Cow, three of the young up and coming actors performing were Cedric Hardwicke, Ralph Richardson and Laurence Olivier.

In 1933 the theatre was converted to a cinema and remained this way until the outbreak of the Second World War. During the War, several ENSA shows ere put on at the theatre as Clacton was a front line town with many thousands of soldiers stationed in and around the area.

The theatre closed down after the war, and for a while the site was turned over to a Louis Tussaud’s Waxworks and amusement arcade. But over the years the whole area gradually fell in to a state of decay and by the 1970s, Clacton’s once proud amusement palace became an eyesore and not something the Council wished to have in a prime location on the sea front. In the late 1970s and early 80s the whole site was flattened, remaining buildings and structures demolished and the area turned over to the NHS, who built an extension to Clacton Hospital which was next door to the site.

Today there are no visible traces of the Palace-by-the-Sea, just a few old photographs and post cards are all that are left to remind us of Clacton’s crowning glory.