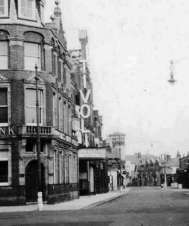 Located in Rosemary Road, the Operetta House opened in 1894 in part of the old Town Hall Buildings. Films were first featured as part of the Operetta House variety shows; after a major facelift (possibly as a result of the safety requirements introduced by the 1909 Cinematograph Act) the building re-opened in April 1911 under Frederick’s Electric Theatres. By 1920 it was a full-time cinema.

It became the Tivoli Cinema in 1924. It continued under Eldorado Cinemas Ltd. and 20th Century Cinemas Ltd. until closure during World War II. It re-opened in 1951 as the Savoy Theatre, presenting live shows, but eventually became a bingo hall. It was later converted into a nightclub and then into shops and flats. 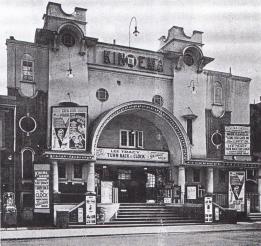 The Kinema Hall opened in July 1913 in West Avenue, and was operated by the Letchworth Cinema Company Ltd. By 1919 it had been re-named Kinema. By the mid-1920s it had a new operator and was re-named Kinema Grand.

The Kinema was closed in early 1962, and was demolished in April 1962. A Fine Fare Supermarket was built on the site. This later became a Fads store, and by 2008 was a Peacock’s store. 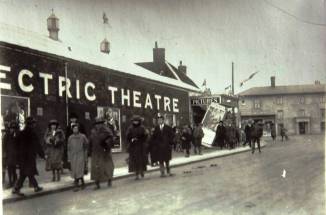 In Old Road, Great Clacton, the Electric Theatre, owned by Mr. Crees, opened in August 1922 on the site of the former village Maltings. In 1926 it was acquired by Charles Wright, who presented live shows as well as films: it had stage facilities and dressing rooms.

In the early-1930s Eldorado Cinemas Ltd. took over but in 1936 the company was taken over by 20th Century Cinemas who changed its name to just the Electric. The cinema was known briefly as the Plaza Cinema in its last days; it closed early in World War II. In October 1947 Suswin’s clothing factory opened in the former cinema building. It is now the site of Mascot Court Housing Estate. 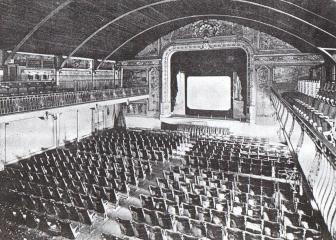 Located along Marine Parade West, the Palace Theatre was built in 1906 as part of the ‘Palace of Light’ complex. It became the Palace Cinema in 1933. It was closed in 1939 at the outbreak of World War II.

After the War it was converted into a roller skating rink, then became a Louis Tussaud’s waxworks museum. It was demolished in 1974. In 1986 an extension to the Clacton & District Hospital was built on the site. 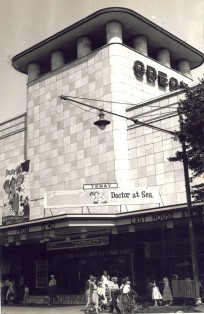 Situated in West Avenue at the corner of Jackson Road. The Odeon was one of the original cinemas built for the Oscar Deutsch chain of Odeon Theatres Ltd.

It was opened on 30th May 1936 with Jack Hulbert in “Jack of All Trades”. The facade was a solid mass of creme faience tiles, which had a flat top tower over the entrance. Inside the auditorium, seating was provided for 746 seats in the stalls and 468 seats in the circle.

The Odeon led an uneventful life, and was closed by the Rank Organisation on 8th November 1975 with Gene Hackman in “Bite the Bullet”.

It stood empty for 18 months, and was then taken over by an independent operator, re-opening as the Salon Cinema on 3rd June 1977 with Barbra Streisand in “A Star Is Born”. The Salon Cinema was closed on 20th November 1980 with Robert Vaughn in “Hanger 18”.

It then stood derelict until 1984 when it was demolished, and shops with flats above, were built on the site. 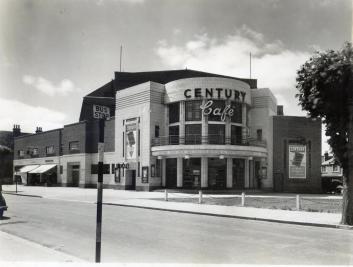 The Century Cinema, on the corner of Pier Avenue and Old Road, opened on 25th July 1936 with the film “When Knights Were Bold” starring Jack Buchanan and Fay Wray. It was designed in a splendid Art Deco style by local Clacton architect G.H.B. Gould and had seating for 1,743 (1,428 in the stalls and 486 in the circle). There was a cafe/ballroom located on the mezannine floor level above the entrance.

There were full stage facilities and six dressing rooms provided and for the first few months of operation it had a cine/variety policy. A Christie 3Manual/7Rank organ was installed that had an illuminated console and it was opened by Frank Matthew.

The Century Cinema was taken over by the Essoldo chain in 1946 and re-named Essoldo. In 1967 the organ was sold and removed, to be installed in the United Reform Church, Ipswich.

Classic Cinemas took control in 1967 and the building was twinned with a Bingo club operating downstairs in the former stalls area and a cinema converted out of the former circle upstairs that had been extended forward to provide 600 seats which became Classic 1. At the same time a second screen opened as Classic 2, seating 187 which was a conversion of the former cafe/ballroom area.

The building has gone through several other changes of ownership through the years and was operated by Gala Bingo Clubs who operate the bingo hall downstairs and the cinemas upstairs. These were the only cinemas operated and booked by Gala, although they operate many former cinema buildings as bingo clubs

In August 2005 both screens were re-furbished with new seating, carpets and decoration and newer projection facilities were installed. Flicks 1 now seats 420 and Flicks 2 seats 133.

The Flicks 1 & 2 Cinemas was closed on 3rd November 2012. Gala Bingo continued in the former stalls area.

In June 2013, it was taken over on a 15 years lease by Adam Cunard of Picturdrome Electric Theatre Company and re-opened on 21st June 2013, reverting back to the original Century Cinema name. Over £100,000 was spent on the two auditoriums and the very latest digital equipment was installed.